Prospect is supporting an ambitious project which has brought together four scientists and a photographer to re-imagine fourteen historic women from archaeology, geology and palaeontology. 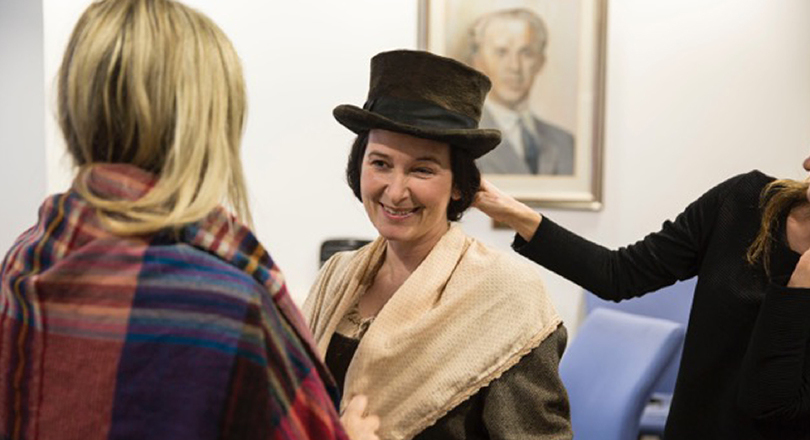 The Raising Horizons exhibition aims to bring to life women from the past at the same time as highlighting contemporary ‘trowel-blazers’.

The project aims to show that women pioneers have always been part of the sciences, despite the popular image of sciences being the domain of bearded (and often white) men (especially geosciences).

Working with TrowelBlazers, famous and little-known women are paired with a range of diverse individuals working today in different sectors and at varied career levels.

Photographer Leonora Saunders’ images represent a moment in time from the lives of each historic individual.

The portraits reinforce the power of imagery to inspire girls to ‘See It, Be It’.

Promoting relatable role models is fundamental to TrowelBlazers’ work, and part of Leonora’s long-term commitment to raising issues around gender and equality through art.

Ranging from the mid-Victorian period through to the 1960s, each historic woman is posed by her modern counterpart.

The portrait of Mary Anning, the ‘world’s greatest fossil hunter’, was released in late November. It is based on a contemporary sketch of her working in rough skirts, a top hat and carrying a hammer, unlike the better-known painting from just before her death showing her in her ‘best’ clothes.

he new portrait also has a canine guest star, standing in for her beloved dog Tray who was killed in a landslide in 1833 while she was fossil collecting.

Her modern counterpart is Dr Lorna Steel, specialist in pterosaurs (one of the winged Jurassic reptiles first found by Mary Anning) and curator at the Natural History Museum, where they have a specimen found by Anning.

You can also watch a short video about the project.

Raising Horizons is currently running a crowdfunding campaign to support the project costs and a 2017 tour round the UK, with scientists, museums, and members of the public from around the world helping to raise money.

* TrowelBlazers’ fossil hunter Lottie doll was shortlisted in the 2017 toy of the year awards for ‘Action figure of the year’.

TrowelBlazers worked with ARKLU Toys to ensure that fossil hunter Lottie, released in 2015, represented a real field scientist and would inspire her owners to get out and discover more about palaeontology.

More than 20,000 have since sold, showing the keen appetite among youngsters for science role model toys.

Lottie is up for auction on ebay

Founded in 2013 by four academics in the geosciences, TrowelBlazers’ mission is to reset imaginations by highlighting women past and present in archaeology, geology and palaeontology; and uncovering the networks that link them.

It combines academic study of women in science in the past with a proactive approach to inspiring future women scientists through public events, collaborations, and an active community of online participants.

More than 30 mini-biographies – many crowdsourced – are hosted on their website.

Leonora Saunders has directed multiple commissioned projects related to cultural ideas on gender, ability and equality, including highlighting the role of women in careers traditionally dominated by men.

Her work has featured in The Guardian, The Sunday Times, and The Evening Standard as well as The Royal Photographic Society Magazine and other photographic journals.

Prospect is a major project supporter, and the UK’s trade union for scientists and other specialists in areas as diverse as agriculture, education, environment and heritage.