A bigger, stronger union as Prospect and BECTU merge

Scientists and engineers in Prospect have condemned prime minister Theresa May’s intention to leave the European atomic energy community as “ill-informed, irresponsible and unnecessary”, after the news was revealed in explanatory notes to the five-paragraph bill to authorise Brexit published on 26 January. Prospect is urging all members – and especially those working in the nuclear industry – to write to their MP urgently.

Tell us how leaving the EU will affect you

The prime minister updated her plans for negotiating the UK’s withdrawal from the EU earlier this month. Prospect is keen to find out how Brexit is affecting members, and your view of the government’s preparations, to help us speak up for you and influence the process ahead.

Whatever your sector, and however you voted in the referendum, please complete our anonymous survey by 12 February. It should take no more than 10 minutes.

Energy minister Jesse Norman agreed at a preliminary meeting with the five nuclear unions to hold further discussions in February to see if members’ concerns about cuts to their pensions can be addressed. Pending the outcome, Prospect suspended plans for further action.

BECTU members working for Picturehouse cinemas in four London sites – Brixton, Hackney, Crouch End and the centre of the capital – are holding a second ballot for strike action as part of their ongoing campaign to be paid the London Living Wage, with results expected on 3 February. A ballot across three of the cinemas in January was challenged by the company’s lawyers on a legal technicality.

The emergency radio system used by the police, fire and ambulance services is due to be replaced in December 2019, but MPs have warned that the new Emergency Services Network may not be ready in time. Prospect is urging the government to continue working with current provider Airwave, where it has members, to ensure a smooth handover.

Prospect is to ballot members at the Dounreay nuclear site in Caithness, Scotland, on strike action and a work to rule after crisis talks broke down when the employer refused to improve a 1% pay offer.

Speaking up for civil service members

A glaring and growing skills gap, increasing workloads and the need for a strategic and systematic approach to pay and grading have been highlighted by Prospect. You can download our submission to the Commons public administration and constitutional affairs committee inquiry into The Work of the Civil Service.

Prospect has also raised serious concerns with the Government Commercial Organisation about its proposals for pay, reward and pensions. Download our response.

Prospect placed an advert in the New Statesman (which you can download as a PDF poster) opposing European airlines’ proposals to curb the right to strike, and stressing that public safety must come before profits. It coincided with the news that Highlands and Islands Airports plans to stop doing bag and body searches at three airports, potentially leaving Scotland’s major strategic assets vulnerable to attack.

A reminder that your quarterly members’ magazine Profile has now gone digital. If you missed our email last week, you can download a PDF of the January issue.
Tablet and smartphone users may prefer to read Profile in the page-turning format.

Prospect has set up a new team to campaign for AEA Technology (AEAT) pensions to be paid in full. After going into administration, the scheme is now in the hands of the Pensions Protection Fund. Please contact AEATpensions@prospect.org.uk. More details on page 14 of January’s Profile.

Mike Clancy considers the search for substance in a world where myths prevail and shows how unions can force opinion to bend to the facts.

Graham Stewart takes a look at woman returners, untapped talent and high heels in “Women and Work: obstacles to equality”. Separately, he regrets the loss of a private members’ bill aimed at protecting workers’ rights post-Brexit.

Eleanor Wade reports from a Prospect/National Union of Teachers panel debate asking “Is your brain pink or blue?”.

Martin McIvor says the government’s new industrial strategy is “a step forward but not yet a step change”.

New guest education blog
Journalist Warwick Mansell asks: “Join a multi-academy trust? As a successful school with a thriving governing body why would you?” Prospect has many members who are school governors as well as its own Education and Children’s Services Group.

Philip McEvoy blogs about uncertainties around future policy on pension provision for dependants, including widows. He also offers some numbers on pensions auto enrolment ahead of an upcoming government review.

Neil Walsh offers background information, including what the Financial Conduct Authority says, to anyone who may be thinking of cashing in their final salary pension.

LegalEye – news from your legal team, including our legal year in numbers, Trade Union Act latest and employment status 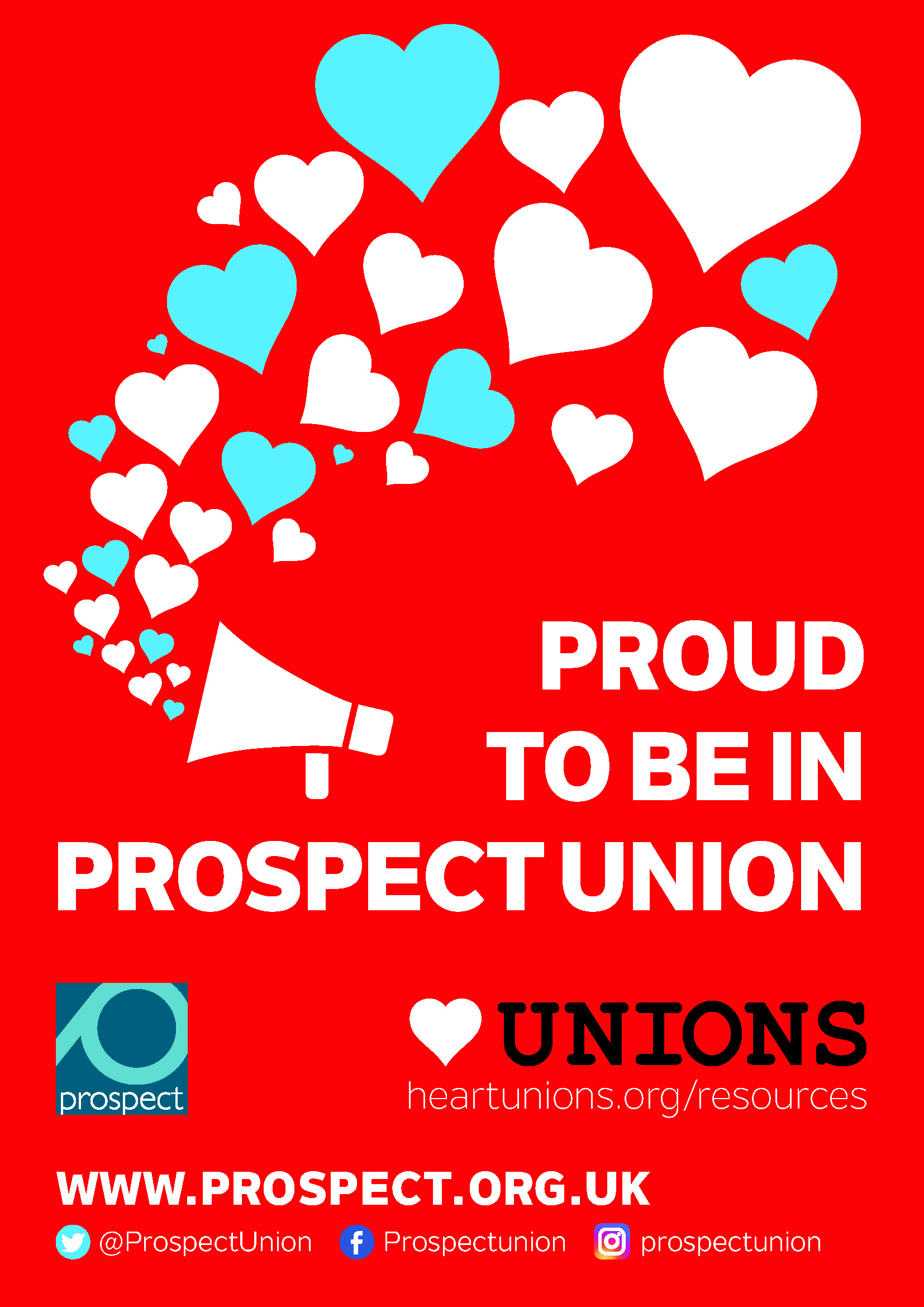 The TUC’s Heartunions week of action is back from 8-14 February to celebrate the great work done by union reps and members in our workplaces and in society.

Prospect Extra’s energy deal is back

Take a look at the Prospect Extra money-saving website for energy deals and more.

Are you following us on social media?

Get instant updates about Prospect and the BECTU sector by following us on social media.

For every member you recruit to Prospect you can claim a £10 voucher or ask Prospect to donate to a charity.

Your union for life

You can stay with Prospect even if you are changing jobs or retiring.

Tell us if your details have changed

If your email address and other contact details are changing, please email Prospect's membership department on membership@prospect.org.uk. Registered members can amend their details via their website member welcome page.