The capacity of the civil service to handle Brexit, concerns over science funding and collaboration, and the rights of European Union nationals were all covered in the Brexit debate at conference. 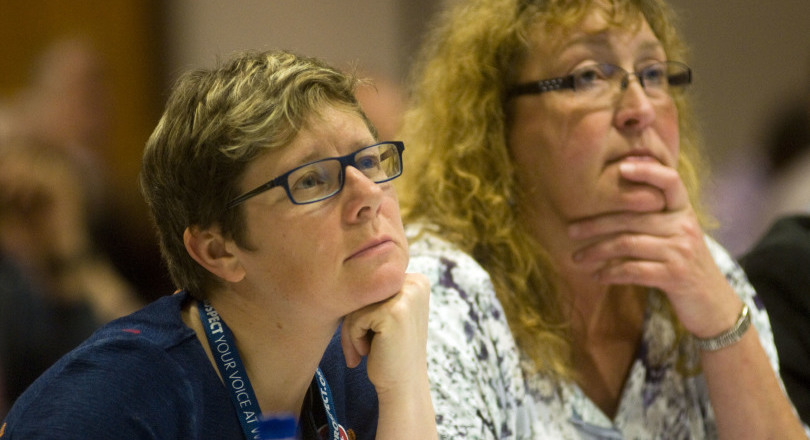 Smith said science and research funding and the rights of European nationals to remain working in the UK were key concerns for Prospect as EU nationals make up a high proportion of the workforce in science and IT.

“UK science relies on EU funding, facilities and collaboration and this could be threatened by Brexit,” she said.

She also warned that legal standards and protections must not be weakened by Brexit.

“Against a background of job losses, all our warnings about the ability of public services to handle the extra work are now being borne out,” Smith added.

She said Prospect would strive to protect members from these pressures and had a clear work agenda for the year ahead.

The British Library branch motion said the civil service was ill-prepared for Britain’s exit from the EU. The service has been shrunk to its smallest size since World War II, with 86,000 posts cut between 2010 and 2015.

David Johnson (British Library) said there was no plan for Brexit during the referendum and, one year later, there is still no plan.

“From trade negotiations to drug testing, the UK lacks the capacity to do this work ourselves,” said Johnson.

He said the Department for the Environment, Food and Rural Affairs would be particularly hit because in 2019 it will be one third smaller than it was in 2010.

He pointed out that the civil service is reported to be working on 500 projects related to leaving the EU. Accountants Deloitte have estimated that an extra 30,000 civil servants will be needed to cope with the complexities of Brexit.

But these staff will not have the breadth of experience and knowledge of those who have left, which puts the government at even more of a disadvantage.

Johnson said the solution was to make a career in the civil service more attractive. “The current state of civil service industrial relations won’t attract the brightest and the best.”

He also highlighted the anxiety and stress that Brexit had put on Prospect members.

He said there had been a 50% increase in the number of EU citizens seeking UK citizenship, but 28% of all applications were refused. He pointed out that the application form for permanent residency runs to 85 pages.

“The government must clarify what rights will apply to EU citizens and what it thinks are desirable skills. The finance sector will be OK, but what about public sector posts? People are stressed and anxious about their futures,” he added.

Another British Library branch motion called on the sector executive to do all it can to support members and their families who are affected by Brexit, provide them with regular information and provide dedicated professional legal advice on employment, residency, access to welfare and public services.

Louise Green (EFRA) highlighted the significant lack of trade negotiators and said the lack of clarity on the terms for exiting the EU was increasing the stress on civil servants.

Helen Snaith (Natural Environment Research Council) said her organisation was already suffering because of the uncertainty. NERC was losing key staff in important positions, losing expertise and the ability to support policy.

NERC was under pressure to get funding from alternative sources without knowing what those sources are.

“Give members confidence that Prospect is fighting their corner,” Snaith concluded.

Sue Ferns, deputy general secretary, outlined what Prospect has been doing and said: “Now is the time to make the most of our strength and diversity.”

So far the union has held information sessions in workplaces across the UK, produced briefings for members and created Brexit pages on its website.

General secretary Mike Clancy will be hosting a Facebook Live Q&A session at 1pm on 19 June – the day the Brexit negotiations begin.

Ferns pledged to continue monitoring developments and stay in tune with members’ concerns. She cautioned that although the union can provide advice and support, it could not give detailed, specific advice.

She concluded by urging delegates to “encourage members to keep telling us their stories and to continue to highlight the benefits of membership.”

The uncertainties associated with Brexit have called into question their long-term job security, with implications for the staff members themselves and for their employing organisations.

Graeme Walker (SNH) said European citizens became colleagues because they were successful in fair and open competition. “These people need our help and support now,” he said.

Brexit is likely to result in the repeal of the European Communities Act 1972 and reversion to the narrower qualifying nationalities of the UK, Ireland and the Commonwealth, effectively excluding EU nationals from civil service posts.

Walker asked delegates to “recognise the invaluable contributions EU nationals make to our workforce and society and understand that they are living with uncertainty over their future”.

The motion also instructed the sector executive to seek clarity from ministers on, and promote measures for, the long-term security of these staff members and resist any attempts by the civil service to restrict their recruitment or promotion prospects after Brexit.

Devanshi Vyas (Scottish Government) focused on the impact on members in the scientific community, agriculture and fisheries and many other areas, who will be directly affected by the loss of targeted funding from the EU.

Although the Treasury has guaranteed that some organisations will continue to receive funding for existing projects and programmes, this does not go far enough, she said.

The UK government must redistribute funding in a fair way, taking into account the importance of agriculture, fisheries, science and development in Scotland, she concluded.

Neil Hope-Collins (Health and Safety Executive) welcomed the government’s commitment to underwrite funding for approved Horizon 2020 projects applied for before the UK leaves the EU.

He said investment in projects and centres of excellence was good but science, technology, engineering and maths (STEM) “needs more than flash buildings”. It requires investment in people too.

He urged delegates to support Prospect in lobbying for long-term investment in STEM and our members’ work.

Hope-Collins also talked about fears surrounding HSE’s work in regulating chemicals. “I fear that HSE will become a bargain basement service provider cut out of the policy decisions.

“HSE needs to be part of policy formulation as well as delivery,” he concluded.

Scottish Government branch’s motion called on the executive to ensure that every effort is made through negotiations with the UK government and, where applicable, the devolved administrations, to ensure that jobs and funding in these, and other, areas will be safeguarded following the UK’s exit from the EU.

The motion from the sector executive pledged to work with branches to:

The British Library branch motion instructed the sector executive to campaign for government to: