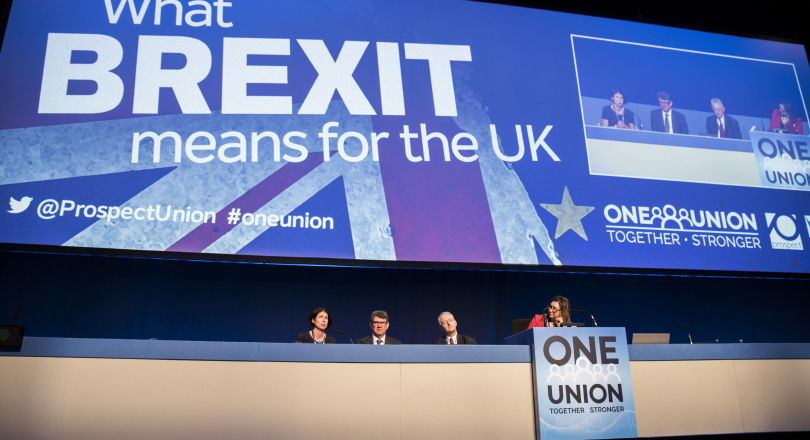 “It’s time to be honest, it’s a total mess.” That was the verdict of Hilary Benn MP, chair of the House of Commons Brexit select committee, on Brexit progress.

The Leeds central MP probably knows more about the detail of Brexit than almost anyone else in the country and was speaking on an expert Brexit panel at Prospect national conference.

In response to a series of probing questions from delegates, the panel painted a worrying picture of a Brexit process that has stalled, is confused, and often based on the wrong priorities.

Martin Rolfe explained how in aviation, there is desperate need to remain part of the European regulatory framework, but set out his concerns that the UK would be left following the rules without a say in them.

Rain Newton-Smith explained that businesses shared this fear, that they would follow EU regulations in order to export but would not be able to shape those rules.

All panelists were united in their belief that the most important thing was the treatment of people.

In response to a question from Ngozi Ugochukwu from the BBC, Hilary Benn painted a harrowing picture of the agony of EU citizens left in limbo due to Brexit and expressed his concerns that lack of Home Office capacity might lead to EU citizens being mistreated in a similar way to the recent Windrush citizens.

As the EU Withdrawal Bill returns to the House of Commons, the debate was a sobering reminder of the extent of the questions still unanswered and a call to arms for members to continue to fight to influence the process in support of the values and priorities of the union movement.