RenewableUK supports its members, which range from small independent companies to huge global conglomerates, to maximise the opportunities in the renewable energy sector. Hugh McNeal, its chief executive, and a former senior civil servant, talks about their work, the challenges facing the sector and why he remains optimistic for the future. 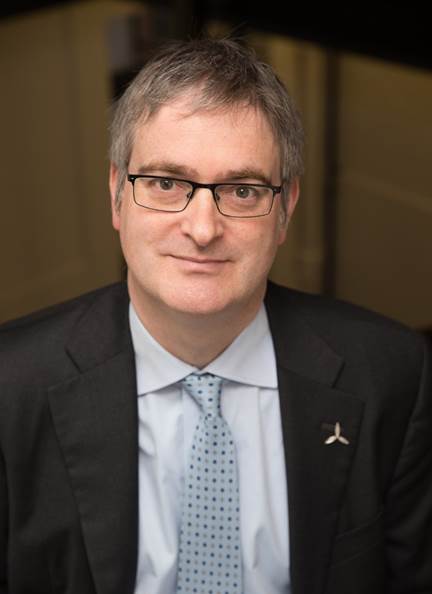 Tell us about your work and the role of RenewableUK?

Trade associations exist for a number of different reasons. The first thing is, obviously, renewables are affected by politics and one of our functions is to make sure that our collective voice is heard by government, by political parties and by media.

We are a reasonably large association with 420-odd members. Over half of those are in the supply chain covering onshore wind and offshore wind, as well as storage and marine technologies.

We want to help members of the association win more work, create more jobs and secure more investment, whether that's in the UK or abroad.

Some of the other things we do are not so well known: for instance we’ll take people abroad on trade delegations; we do work on health and safety and on skills.

What sort of practical help do you offer to members?

We have a database of the market for renewables in the UK and, in some cases, overseas. We can tell members when contracts are likely to be let, who's winning them, so they can form relationships, and work out when they want to plan and bid for work.

I’m lucky enough to spend quite a lot of my time travelling the country, to coastal communities, and we will have evening events in those places. People get to talk to each other, they get to exhibit, and create business networks.

Do you have an aspirational figure in mind for what renewables could provide in the UK's energy mix? Do you ever see it being 100%?

If you go back less than a decade, we were completely at the margins of energy conversation and energy debate.

Now if you look at electricity that's not the case, and that's happened more quickly than anyone predicted. That's not just in our country, but globally.

The aspiration is for a low-carbon energy system with renewables as its backbone.

What’s your assessment of the state of the renewables sector at the moment?

I am positive, but it's not a perfect moment. There are lots of good things happening in offshore wind. We need to get a sector deal over the line that will secure the investment and the high quality jobs that we need.

For other parts of our membership, if you're working in onshore wind, in the marine sector, or floating offshore, then we're not really seeing what we need from government to make sure that projects can get built.

You released figures recently that revealed new onshore wind installations fell by nearly 80% last year. Why is onshore wind struggling so much?

It doesn’t make any rational sense. The government seems to be putting so many barriers in the way of our ability to deploy.

This is a cheap technology with the potential to create thousands of new UK-based jobs. We have lots of ‘shovel-ready’ sites that could be good to go if government changed their policy on onshore wind.

Opponents to onshore wind are a vocal minority and in some cases they're politically powerful. They've always been a minority. When you look at the polling across every single demographic, in every part of the country, people are in favour of onshore wind.

We can generate cheap power and consumers could benefit, so I don’t understand why we’re not doing that. The trade-off is between generating our own power, or being more dependent on foreign markets, or markets over which we have no control.

Do you have a position on nuclear?

The only position that we have on nuclear is I'm not interested in attacking it.

At the moment, certainly in the modelling when I was a civil servant, we were dependent on 16 gigawatts of new nuclear being built by the early 2030s.

We will have a lot coming off the system on the nuclear side, so if new build nuclear isn't going to happen, then what are we going to replace it with? If renewables can help, that's great.

What we're all trying to do is to decarbonise our economies and to generate high-quality jobs for people. Instead of this transition being seen as a cost or something that people have to pay for, it should be seen as a great opportunity. I genuinely believe that.

Are your members concerned about a skills shortage in renewables?

There’s certainly going to be a challenge.

In offshore wind we’re working with people who lead on skills in nuclear, in oil and gas and the motor manufacturing sector.

It’s important that we work together, but we're also in competition with each other in everything from high-quality apprenticeships through to STEM graduates. So finding the right balance is tricky.

For us, there are two things I really want to see happen through the offshore sector deal. One is, pathways for people who are already in the sector. The offshore technician role is likely to change, if not in the next decade, certainly the decade after. How do we make sure that people stay in our sector?

Then how do we make it easier for people to transition between sectors? That historically has been pretty tough but I'm pleased the Global Wind Organisation have a new future skills recognition scheme, which they’ve just started. Let's see what comes of that.

I'm also conscious of health and safety. Just because you've worked offshore in oil and gas, doesn't mean you should automatically be able to do the equivalent in renewables.

There are health and safety issues that we've got to be always alive to. So, where there's equivalence, great, let's make it easier. But you’ve got to be alive to the differences as well.

How big a difference will battery storage solutions make to renewables?

It's a much more complex issue than that, or rather it's not as simple as that.

We can use sophisticated forecasting and different forms of storage technologies to balance the grid system.

But you also need to look at the system as a whole and the fact that wind complements all of these other new technologies on the system, and does so potentially more cheaply and in a greater and more flexible way.

You can switch off, remotely, in less than a second, a single wind turbine. Then you can get up and running again, in 15 to 20 seconds, a whole power station of turbines.

How big a blow was the government rejection of the tidal lagoon scheme at Swansea?

We don't argue on behalf of single projects but Tidal Lagoon Power is a member of ours, and of course it was disappointing for them.

The broader point is that we've got lots of these different technologies that aren't quite able to compete commercially yet. How are we, as a country, going to find ways to enable them to come forward? Whether that's marine technologies, or whether it is floating offshore.

They could open up export markets for us around the world. What’s our plan?

At the moment the prospects for offshore are good, but what about all of these other technologies?

Could you understand the decision a bit more because of your civil service background?

That's a very fair question to ask but I've got to be careful how I answer because I still have duties as a former civil servant.

We can have a long conversation about how the government assesses value, and if it’s sensible or right.  We can think about the social value of capital, we can think about how much money, or how much value, you want to place on particular types of jobs or exports. It's all in the Treasury’s green book.

So do I think I have a sense about how that judgement was reached in terms of what sorts of how the calculation is done? Yes.

But we've got to make decisions to do things at some point, and not just to say ‘well, because of this calculation we can't do it now’. That isn't a comment on Swansea’s scheme, it's just a general point.

We've got a great opportunity here and we've got a lot of work to do that a lot of people could benefit from and so we should probably crack on, and get on with it.

Do you get the sense that renewables is a priority for the government? Do they fully grasp the opportunities here?

Sometimes, but most of the time, not. Do we have a government where this is the number one priority? No, it isn’t. That’s the straight answer.

We talk positively with government. Claire Perry MP, the energy minister, is a breath of fresh air but I don't think they have the bandwidth at the moment [because of Brexit.]

The government’s energy is are directed elsewhere and it's not unique to the renewables sector. You could talk to people in other areas and really important things are being not being focused on because of where people’s minds are right now.

What developments are you most excited about?

There's loads! So first with offshore, if we do the sector deal, you're looking at three times more full-time, high-value jobs with higher than average wages in coastal communities.

The second thing is the people who led the renewables revolution are now doing other things as well, like different storage technologies linked to digital technologies that would create the future grid system I mentioned earlier.

We've got to get beyond power and we've got to work out what we're going do about heat and electric vehicles. They are all linked.

Those renewable pioneers are getting backed by money and people want to join the workforce.

The average age of our workforce is 38, so it's a good position to be in. We've got to keep ourselves attractive but young people want to work in renewables and we’ve got to take advantage of that.

Renewables can be a win-win on many levels, globally, nationally and locally. What’s most important to you?

For me, personally, it is about the places that I visit and the impact that we can make there by having anchoring investments or anchoring companies.

The idea of being able to transform parts of the UK and the idea of renewables being part of the mainstream… People who used to be critics of renewables now recognise that it really works.

It does seem like differences are being made to towns and cities that need it. That’s a good reason to get out of bed.