Prospect rep Martin Gavet was one of the founding members of equality charity Liberate, which organised the event. He describes here how much progress the island has made on LGBT issues in a short amount of time. 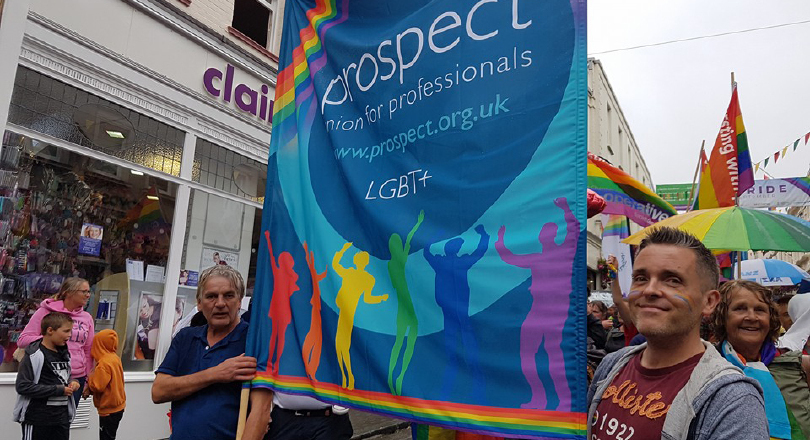 Members carried Prospect banners through the streets of St Peter Port in Guernsey during the channel island’s first Pride parade on 10 September, kicking off a week of events that will culminate in Jersey’s parade in St Helier.

He remembers holding meetings around his kitchen table when it started in 2014. “In those days we blacked out the windows to make people attending feel more comfortable. It’s difficult for LGBT people to be out in a small island community, so it has been heartening to see how far we’ve come in such a short amount of time,” he said.

According to Gavet, many LGBT people on the island felt pleased with the coverage of the event and were starting to feel accepted, especially the trans community, who he said had a strong presence at the parade.

The Channel Islands have lagged behind England, Wales and Scotland on LGBT rights issues. In Guernsey civil partnerships and same-sex marriage have not been introduced, while the age of consent was only equalised in 2010.

Gavet remembers listening to the debate on the age of consent in the States House at that time, and how hateful and derogatory the language was. In contrast, he said, the maturity of the debate around the equal marriage law was encouraging to see.

Guernsey now permits adoption by gay couples and is due to consider a bill on marriage equality later this month. If approved, this will pave the way for the first same-sex marriages on the island early next year.

“I would like to see things go further and for hate crime legislation to come in, and for Guernsey’s gay discrimination laws to catch up to those in Jersey,” said Gavet. “Gender dysphoria is also an area where more work needs to be done.”

Despite rain, the parade attracted thousands of people who marched or lined the route to watch and offer support.