The need for an employee voice and a framework to improve working lives are at the heart of Prospect’s good work agenda, deputy general secretary Sue Ferns told a meeting at National Grid during Union Week. 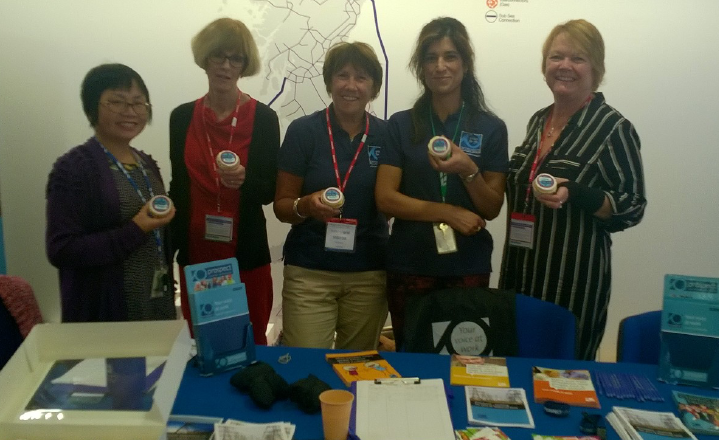 The event on Tuesday (4 October) was one of 500 or so activities being organised across the UK this week to encourage people to talk about the benefits of Prospect membership and non-members to join.

The reps running the Union Week stall at National Grid’s HQ had interest from dozens of people. Some were already members – several who weren’t signed up on the spot. Others took away literature and freebies (from cup cakes to cups to keyrings) and application forms, keen to find out more.

At the lunchtime meeting, Sue Ferns talked about the wide spectrum of Prospect’s work to support members, all informed by the union’s “good work” agenda.

“It’s not just about how much you get paid but your life at work. It’s about having have a secure, interesting and fulfilling job; to work in an organisation where you feel you are treated fairly and can trust your management,” Ferns said.

It was important to have some choice and control over hours. Members in surveys consistently said they would like to have some flexibility, and not just women in relation to childcare.

Good work also meant rewarding people for what they put into an organisation and giving them a degree of control about their pace of work.

One illustration of how Prospect could help members related to challenging bad performance management systems.

In the civil service effective data gathering had revealed biases in the system against disabled and black and minority ethnic staff. People over 50 were also more likely to get poor marks.

“What can Prospect do? We can prepare members and train reps. Often in performance management people don't really understand the system, procedures and processes or are not clear about the criteria.” Systems that focused on behaviour could also become very subjective, she added.

She stressed the need to press employers to provide regular data, as this could help tell the story about ineffective processes.

Ferns also highlighted Prospect’s work on equality and diversity and unconscious bias. "We've got to address this as a business issue, particularly in engineering-based organisations where there are skills gaps and shortages,” she said.

Women comprise only 14.4% of the science, technology, engineering and maths workforce despite making up half the overall UK workforce. Yet research showed that diverse workforces helped to drive internal innovation and business growth.

Prospect had been involved in a survey about women’s personal protective equipment, said Ferns.

She also showed the meeting a video of five Prospect women members visiting a north London primary school to inspire girls to change their view of professions like engineering.

Finally Ferns highlighted Prospect members’ participation in a survey with some other unions about productivity at work. The 7,500 responses provided a “unique data set”.

Respondents had a good understanding of the need to be productive and good ideas about how to improve things, but 25% felt they were never listened to; 55% sometimes and only 20% always.

Of 53% who said they were working much harder, only 40% felt more productive as a result.

Cost cutting and a race to the bottom would not improve productivity. That required investment quality and value, as well as an independent collective voice in the workplace, Ferns said.