Young professionals get to grips with the future of work

Young professionals get to grips with the future of work

Between 45-75m jobs will be wiped out by technology over the next 10 years. What does this mean for your jobs? 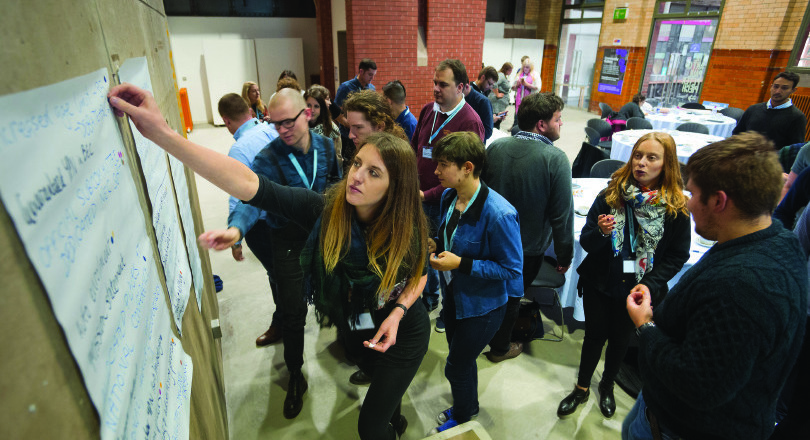 Nigel Flanagan, a senior organiser with UNI Global Union, led a workshop at Prospect's annual young professionals forum in Manchester in November, setting out what work will look like in the future.

The sectors that UNI organises in rely on young workers – often with untypical working patterns. “All the problems you can have at work exist in UNI sectors. UNI brings together experience from all over the world,” he said.

The trade union movement in the United States is “on its knees”. Union membership density is 11% across the economy and just 6% in the private sector. The biggest global companies are organised, controlled and run from the US, said Nigel.

The Right to Work legislation, which is enthusiastically supported by President-elect Trump, is the opposite of what it says and makes it very difficult for trade unions to operate.

“It’s not about right and left,” said Nigel. “But the impact of Trump’s policies could be very negative for trade unions and could trigger a second, world-wide recession.

“The future is deregulated, weak, disorganised workforces which will have a massive impact on equality.

Nigel pointed out that economic power is shifting to other parts of the globe. “Work is moving somewhere else and unless you can do your work online, you’ll have to move too,” he said.

Annual reports from global companies show that most are restructuring their businesses and moving to ‘mega-cities’. “Kuala Lumpur, Singapore and Beijing have bigger economies than most countries. So we have to think about how we organise ourselves.

“Power and wealth are becoming more concentrated. There is a connection between inequality and the level of trade union organisation.”

Nigel outlined what work will look like in the future and stressed that no sector will be immune from these effects.

He went on to outline UNI's 8-step strategy, ‘Breaking through’, which aims to show how people can achieve change in their own workplace:

He set the Prospect delegates to work on how they could apply the stragegy, encouraging them to think about what they would do if they could change one thing at work. "Find the issue most widely and deeply felt and build your organising campaign around that, he said.