Experts share their knowledge with Prospect health and safety reps

Prevention, reporting and organisational cultures all have a role in health and safety. 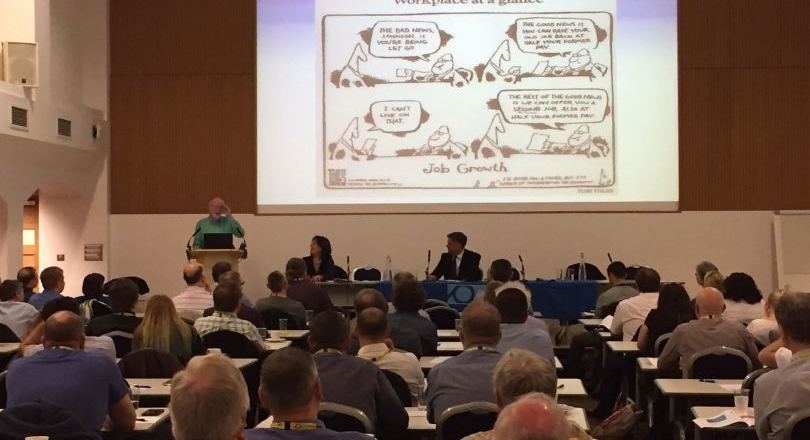 More than 100 health and safety representatives met in London on 29 March to hear from academic and industry speakers at Prospect’s H&S conference.

Professor Sir Cary Cooper, an expert in organisational psychology and health, used extensive evidence to show the effect that mental ill-health is having in the workplace.

He said stress was the leading cause of long-term absence for non-manual workers, with mental ill-health coming a close third after medical conditions, according to research by the Chartered Institute of Personnel and Development.

This is taking its toll on the economy, Cooper said, and is a critical business issue.

He pointed to a 2007 study that found that absenteeism cost employers £8.4bn and presenteeism – working while sick, often due to insecurity – cost almost twice as much.

“This was before the recession,” Cooper noted. “New studies are being done now, but imagine if they find that presenteeism is costing quadruple what absenteeism is.

“It’s the biggest threat to the economy. And a lot of it is down to poor management. Socially unskilled managers have been shown to be a key issue affecting well-being at work.”

He has been involved in research that shows that employees who worked longer hours – more than 40 hours a week – got ill more frequently.

This is costing employers, he said, and also results in more health and safety incidents.

He made a strong business case for focusing on primary prevention, as advocated by unions, saying that employee assistance programmes should be a last resort.

Dr Olivia Carlton, head of occupational health for Transport for London, spoke to delegates about TfL’s approach to managing health in workers and the workplace.

She cited evidence showing the cost savings of early intervention. Workers who had physiotherapy sooner took less time off on average than workers who received it later.

She said TfL offers health services beyond statutory requirements but expects employees to take responsibility too, including taking up support services offered in their own time.

“We do this for two reasons – because there’s a job that has to get done, but also because it encourages workers to take responsibility for their own health.

“Working together to share responsibility on health conditions transforms lives,” she said.

For example, support will be offered to people with drug and alcohol problems who take responsibility for their conditions but, should they fail a test, “it’s too late”.

Carlton said: “Unions have been very positive about our approach to occupational health and their partnership brings TfL a huge amount of value.”

Frances McCarthy, head of personal injury at Pattinson Brewer, Prospect’s solicitors, spoke about Brexit and what it might mean for health and safety law.

She acts exclusively for claimants in workplace accident and occupational disease cases and has represented victims in most of the major disasters in recent years.

She said that the “six-pack” of regulations introduced in 1992 to comply with EU directives had “made a fantastic, brilliant difference” in helping to sue organisations over health and safety failures. It had also contributed to preventing accidents occurring.

The fear of prosecution really helps to focus organisations on keeping workers safe, though of course good employers want to do that because it’s the right thing to do, she added.

But since the government introduced the Enterprise and Regulatory Reform Act in 2013, it has no longer been possible to make claims for breaches of the EU-based regulations.

The Great Repeal Bill could threaten health and safety law further, McCarthy said, as the government will have more power to change legislation with fewer checks and balances.

She said the Health and Safety Executive will have to step up. But unions can campaign against deregulation by making the case that NHS costs and welfare costs could increase.

The silver lining is that Brexit presents an opportunity for union recruitment and retention. “Never ever have workers needed a union as much as they do now,” she concluded.

The person in safety culture

Professor Tim Marsh of Ryder Marsh, who is an expert in behavioural safety, organisational culture and safety leadership, held a lively interactive session after lunch.

He used eye-catching illustrations and got delegates to join in different exercises to show how psychological aspects can either prevent or promote good health and safety cultures.

For example, the audience was shown a crashed red sports car, told to imagine that the young driver standing next to it had sped past them and asked what they would like to shout at him as they drove past.

Responses suggested the driver was to blame for being reckless and deserved to crash. But Marsh asked the audience how their responses would differ if they were told the young man had been a junior doctor responding to an emergency.

This was a demonstration of fundamental attribution error and just world fallacy, which are biases we can all hold but which stop us seeing past the individual in investigations.

It is also important to understand how communication can affect health and safety. Marsh described how a worker who is told to get a job done safely, but by a certain time, would hear only the importance of the deadline and prioritise this over health and safety.

He also got a few reps up on stage and showed how easy it is to get workers to do something they don’t want to, or know they shouldn’t do, simply by asking them nicely.

This reinforced his argument that it is the organisation and not individual workers that should be the focus in creating good health and safety cultures.

Sean Parker, a specialist in safety reporting and performance-based regulation at the Civil Aviation Authority, spoke about the CAA’s experience in creating a Just Culture.

He said that the organisation’s reporting culture dated back 40 years, when pilots were obliged to report safety risks. To encourage reporting, a ‘no blame’ culture was introduced in the 1980s but staff took advantage of it.

Out of this came the Just Culture, which seeks to encourage greater reporting, but hold workers responsible where it is fair and reasonable. The aim is to make employees feel it is safe to report risks or incidents.

But this is not enough, Parker told delegates. Employers have to take action based on reports and must be seen to be taking action, so feedback is essential to a Just Culture.

On the day Article 50 was triggered, he mentioned that a Just Culture definition had been included in EU regulations, which also require employers to consult staff representatives.

He said health and safety is best served when employers and staff work together to look for the causes of problems, rather than blame an individual when something goes wrong.

Sarah Page, Prospect’s health and safety officer, reminded delegates of unions’ effectiveness in reducing the incidence of accidents and ill health in workplaces.

She said employers should set the tone for that partnership, but that health and safety reps can help it flourish through their positive influence and links with the workforce.

Page welcomed the Health and Safety Executive’s recent announcement that it is “back in the game” on work-related stress, adding that unions endorse its focus on primary prevention.

But she acknowledged the benefits of other measures employers can use to support their staff in staying healthy, as long as employers promote and use them effectively.

On that note, she said Prospect has produced new guidance on employee assistance programmes. Research has shown that only 5% of workers have made use of EAP services because they fear disclosing their conditions due to the stigma attached.

This is counterproductive, she argued, referring to a point McCarthy made earlier about how difficult it is to win a personal case if an employer offers counselling.

Page said EAPS must work for employees. She called on reps to monitor the quality of services offered and tackle the stigma of disclosure.

This will provide a good opportunity to show employers how H&S reps promote the health and well-being of the workforce and to recruit and retain members, she concluded.

They spoke about how an emphasis on leadership and communication within HSE’s own network of health and safety reps was ensuring the organisation practises what it preaches.

Judge invited delegates to indicate the level of their involvement in health issues, rather than safety ones, and in particular mental health issues. The response indicated that Prospect has a good grasp of current priorities.

He commended the delegates for their contribution to health and safety, and for helping Great Britain to work well.

“Performance management reviews and how people feel about their pay can all have an effect on this.

“Prospect’s voice on safety is listened to. It’s based on fact. But we need to use that wisely. We want to be constructive and collaborative but we expect reciprocation.”

Gordon Hutchinson, who was chairing the afternoon session and is a rep in the Met Office branch, thanked Sarah, who is leaving Prospect after nine years, for all her work.