Reaching for the stars

Reaching for the stars

Prospect member Rain Irshad has been nominated for a Rising Star award from WeAreTheCity, a female development organisation. 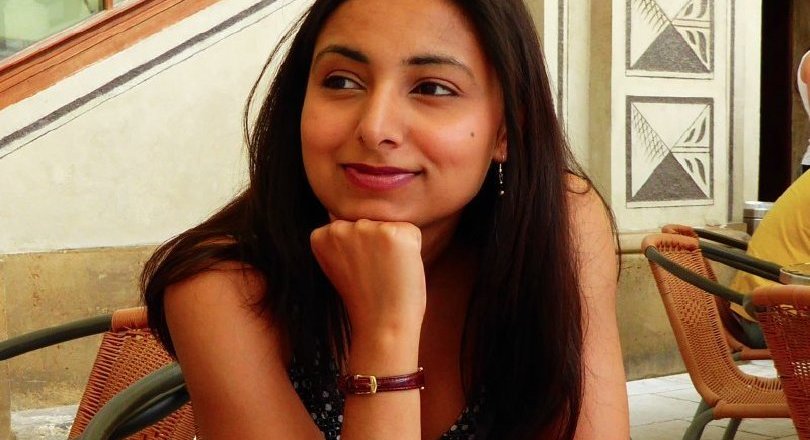 Rain manages a small team working on robotics for testing space rovers and navigation software at RAL Space, based at the Science and Technology Facilities Council’s Rutherford Appleton Laboratory in Oxfordshire.

She designed and patented an instrument for measuring atmospheric temperatures which became her first instrument in space. Rain is also using robotic technology to develop autonomous landmine sensing.

Like a lot of children, I grew up fascinated by space. My dad used to have these big A3 Reader’s Digest atlases. One of them was an atlas of the world with star charts at the front and I used to pore over these things, trying to learn the constellations and make them out in our heavily light-polluted neighbourhood at night.

I used to love exploring and space was the ultimate frontier to explore, so I wanted to be an astronaut for as long as I could remember.

I wrote to NASA. They told me what I needed to do and I started working towards those goals.

It was a pretty exciting prospect when I realised that I could build things that would go into space and send back pictures or information about what’s out there.

I got a flying scholarship with the RAF so that I could learn to fly planes. I wrote to universities to get work experience with research groups. Eventually, I got a place at Oxford University to read physics.

At university, I was diagnosed with endometriosis and realised I wasn’t going into space. Instead I did a Masters in Instrumentation Systems at UCL where I worked on a concept for an adaptive optics X-ray space telescope and I realised that I could still explore space by sending instruments up there.

I did a doctorate in atmospheric physics at Oxford where I learned about hardware and software development for measuring atmospheric aerosols and was able to gather data that would improve the integrity of satellite measurements from space.

After that, I spent four years as a post-doctoral researcher working with the planetary group at Oxford and teaching in my spare time. There, I worked on everything from lab-based experiments to make the kinds of gases you find on Jupiter, to seismometers for measuring Marsquakes.

I designed and patented an instrument for measuring atmospheric temperatures and that became my first instrument in space.

Eventually, I moved to RAL Space to work as a systems engineer and began looking at larger projects. I was the lead systems engineer on a proposal for a mission measuring Exoplanets (planets orbiting other stars) which involved coordinating organisations across 13 different countries.

I led a project to look at the probability of life surviving on Phobos and managed a project to develop a Highly Miniaturised Radiation Monitor for space, as well as working on other projects.

I continued to work on the Martian seismometer instrument which landed on Mars in 2018 as part of NASA’s InSight mission.

In 2015 I took on the role of autonomous systems lead at RAL Space and managed a small team working on robotics for testing space rovers and navigation software. I realised that this technology could be adapted for other applications.

On the space side, I’m working with the UK and European Space Agencies on establishing facilities such as the Harwell Robotics and Autonomy Facility as well as Sample Curation Facilities to support a future Mars Sample Return Programme.

People who inspired me

There isn’t any one person, but I work with inspiring people every day: Sarah Beardsley, my line manager, is someone I’ve looked up to for a long time. She has supported and believed in me for years and encouraged me to strive for things I didn’t think I could do.

Sharon Cosgrove, the former executive director of strategy, planning and communications at STFC was my mentor through its Accelerated Development Programme. She was a wonderful example of a woman who had achieved a great deal, was incredibly skilled, intelligent and insightful, but still treated our meetings as occasions where we exchanged knowledge and experiences at an equal level.

Ludovic Duvet, who leads the Human and Robotic Exploration team at the European Centre for Space Applications and Telecommunications, and with whom I’ve worked closely for a number of years, is someone I’m endlessly impressed by.

He works harder than anyone I know and we’ve often been on opposite sides of a table, trying to resolve issues from differing points of view, but we’ve always been able to work collaboratively and effectively, even when we’re both looking for different outcomes. It’s admirable and I have a lot of respect for him.

We meet inspiring people every day, we just don’t always have the opportunity to stop and appreciate them.

It’s unfortunate that we’ve come so far, and there is still some way to go when it comes to fairness in the workplace between men and women. I have experienced difficulties sometimes, but I’ve also had brilliant support from male and female colleagues and that’s fantastic.

There was one particular incident when I was at Oxford and we were working with a contractor who found it difficult to understand or accept the things I was saying to him. I eventually discovered that if a male colleague repeated what I said, word for word, it suddenly made sense to this man!

The peculiar thing was that my colleague knew nothing about the technical work I was proposing – it wasn’t his area of expertise at all, but he was very supportive and happy to help find a way around the problem.

It’s a shame that we had to do that, but it was great that my colleagues had my back. It’s those dynamics and that support from, men as well as women, that will help us with the gender balance in STEM.

After travelling to Cambodia on holiday, I realised that there was still a major problem with landmines across the globe and proposed a system for autonomous landmine sensing using our robotic technology in South East Asia.

I was awarded funding through the Global Challenges Research Fund to develop this work and am currently working with Fardoulis Robotics, Buckingham University and the Mines Advisory Group to develop a solution.

What work frontiers would you like to conquer next?

I’m really excited about sample return. It’s a big part of NASA’s Global Exploration Strategy for the next couple of decades and it’ll likely be the first time we bring back pieces of another world that could potentially harbour signs of life. It could answer so many questions about how life arrived on Earth, about its origins in the universe, about what conditions it can survive.

As well as that, NASA is working to establish a Deep Space Gateway: a platform around the moon that can act as a stepping stone to the universe. It’s the next step in space exploration and it feels almost like science fiction. We’re going to be investigating parts of the moon that we’ve not been to before, the possibility of building lunar-bases with 3D-printed bricks and repairing satellites in orbit.

It’s an incredibly exciting time and I’d love to contribute to achieving these things, whether it’s helping to develop instruments to return icy moon samples, building a curation facility to analyse samples or even in helping to strategise and decide what we should be involved in next.

I am also a STEM ambassador and act as a mentor for young men and women in STEM. I give talks to schools and university students and like to be involved in outreach programmes when I have time.

My advice to an 11-year-old girl would be to take some time to learn about the world and yourself. Figure out what you love to do and what you might want to do when you’re older. Then go for it – there are lots of opportunities for those who aren’t afraid to look and put themselves forward.

Eleven is a great age. You have time to explore and try out lots of new things. Don’t be afraid of doing that, or of changing your mind if you find that something isn’t what you expected. Be curious, explore and don’t be afraid to make mistakes – that’s how we learn.

I don’t have much of that at the moment. I was expressing regret to some of my friends that I’d not been able to read as much. That used to be my favourite thing to do and I’d mastered the art of reading while walking without bumping into lamp posts!

They bought me a subscription for audiobooks for Christmas and I’m working my way through the ‘Rivers of London’ books.

I haven’t had as much time as I’d have liked to get involved with Prospect. I’ve been doing a bit of work with the BAME group at STFC and have been speaking to the Prospect representatives there to see if there’s anything I can do to support their work. I’m hoping to continue with that in the longer term.